Using the section about Olivia, in which the narrator reflects on what his sister was like when she alive, to fill the setting and the story with a nostalgic glow and kind of otherworldly vibe

This is such a strong premise – two boys searching a small Florida island for the ghost of their dead sister as they wrestle with the guilt and grief of the tragedy two years later.

There is enough there for a novel, right? Oddly, though, the plot creeps along toward a non-resolution resolution that barely seems enough to sustain a moderately short story.

Regardless, it’s a very good story. The plot’s movement or lack thereof doesn’t matter. Russell, still a grad student when this story published, does a remarkable job of creating a feeling of romance around the setting.

It does take awhile. The premise explodes into being during the story’s opening paragraphs but then kind of lays flat for a few pages. I kept longing for Stuart Dybek’s patented myth-making magic to drop in. Dybek can turn a Blockbuster Video parking lot feel like El Dorado (see his “If I Vanished”), so surely Russell can get some nostalgia glow burning here with such an amazing setting.

It really takes effect in the middle of the story when the narrator tells the reader about what his sister, Olivia, was like when she was alive. It is Olivia that provides the magic around the setting. Her imagination, her drawings, her odd slant on the world.

What was previously a static presentation becomes one of memory and magic. Her childhood and innocent wonder at the world lives on even as her physical being does not. And that’s quite a trick on Russell’s part.

Wallow saved all of her drawings. The one labelled “glowerm groto” is a sketch of a dusky red cave, with a little stick-Olivia swimming into the entrance. Another drawing shows the roof of the cave. It looks like a swirly firmament of stars, dalmatianed with yellow dots.

“That’s what you see when you’re floating on your back,” Olivia told us, rubbing the gray crayon down to its nub. “The Glowworm Grotto looks just like the night sky.”

“That’s nice,” we said, exchanging glances. Neither Wallow nor I knew of any caves along the island shore. I figured it must be another Olivia utopia, a no-place. Wallow thought it was Olivia’s oddball interpretation of Gannon’s Boat Graveyard. 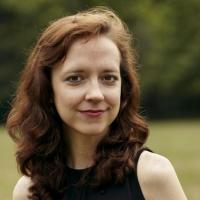