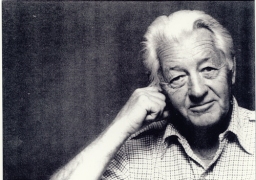 The View From The Balcony by Wallace Stegner, 1948

Stegner has many interesting things to say here about the post-war landscape, the way America’s new confidence brought forth by the victory greatly affected power dynamics in the world and among the different generations at home. It’s remarkable that he had such insights – many of which were proven all the more accurate during the ensuing decades – just three years after the war’s end.

But the most memorable point made here, at least to me, is Stegner’s juxtaposition of boys and girls thrust into the torturing stress of war at the age of 18 and then dealing with the, in some cases, equally harrowing stress of establishing themselves back home as married careerists in their early and mid-20s.

He sets up this contrast with the story’s premise and setting: a college in Indiana where a group of young veterans are living together and completing their degrees. Stegner uses the thoughts of a young English veteran, Lucy Graham, to forward many of these ideas. The characters come off as equal parts hero, villain, strong-willed adult, and impudent child. And that’s quite the magic trick on Stegner’s part.

Then it struck her as odd, the life they all lived: this sheltered, protected present tipping ever so slightly toward the assured future. After what they had been, navigator and bombardier, Signal Corps major, artillery captain, Navy lieutenant and yeoman and signalman first class, herself a WAAF and two or three of the other wives WACS or WAVES – after being these things it was almost comical of them to be so seriously and deeply involved in becoming psychologists, professors, pharmacists, historians.