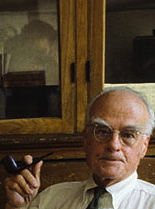 The Iron City by Lovell Thompson, 1937

Grimes and Shank begin the story’s journey in the respective roles of host and parasite. Gradually these roles change as Grimes’ interest in a photo belonging to Shank grows into obsession. By story’s end, Grimes has lost himself in obsession and the reader no longer recognizes the character. It’s a remarkable transformation to author through a novel, let alone with the brevity of a short story. And that’s quite a trick on Thompson’s part.

Shank felt the need to play upon Grimes’s admiration for Mary and thus to assure  himself of Gideon’s protection. Every time that Grimes was permitted to see the picture of Mary, and this was really often though never without preliminary resistance, Shank accompanied the revelation of the beautiful face with a new tale of the woman’s extraordinary humbleness. These revelations, coming with the sight of the picture as they did, filled Grimes with envy and passion.