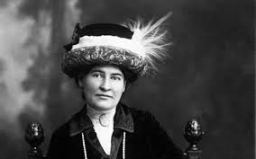 We’ve looked many times at the so-called O. Henry twist story. Guy de Maupassant maybe wants that title back. But regardless of who invented it, you know how it goes – the plot crescendos to a “gotcha” moment at the very end. Usually it’s ironic. Often it’s funny. Sometimes it’s sad. Many people think it’s always corny.

I wouldn’t say it’s always corny, but that kind of twist ending unquestionably overshadows the rest of the story.

In today’s Willa Cather story, we do get a flash of irony at the end. What’s really cool, though, is that it doesn’t take over the story. The themes and ideas throughout the text remain the central takeaways regardless of the ending.

It was during their wedding journey that he discovered her two all-absorbing interests, which were to become intensified as years went on: her passion for dress and her feverish admiration of physical beauty, whether in men or women or children. This touched Dunlap deeply, as it seemed in a manner an admission of a thing she could not speak.

Before their return to Paris Dunlap had, for the time, quite renounced his hope of completely winning her confidence. He tried to believe his exclusion just; he told himself that it was only a part of her splendid self-respect. He thought of how, from her very childhood, she had been fashioning, day by day, that armor of unconsciousness in which she sheathed her scar. After all, so deep a hurt could, perhaps, be bared to any one rather than the man she loved.