When I was four years old, the word BLUE appeared on my forehead in cerulean block-print letters. At the time I wasn’t aware that this was anything out of the ordinary. I thought maybe my parents were trying to teach me how to read. My parents thought I had taught myself to write. Oh, honey, yes, that is blue! they said.

Silly, they said. On your head.

I reached for my head. I didn’t feel anything. They showed me a mirror. There were blue letters there. But I hadn’t written them. 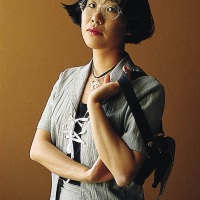