We’ve had a few stories about jazz on the SSMT website over the years. None were quite as visceral, though, as “Solo On The Drums.” Petry uses the drum solo as a means to seamlessly share the backstory of Kid Jones. With every hit on the drum skins, the feelings and information intensify. Soon they become extremely personal – from current relationship dramas on down to the problems of his childhood with his mother. Kid Jones is exhausted by the end of the drum solo, and so is the reader. And that’s quite a trick on Petry’s part.

He made the big bass rumble and reverberate. He went a little mad on the big bass. Again and again he filled the theater with a sound like thunder. The sound seemed to come not from the drums but from deep inside himself; it was a sound that was being wrenched out of him – a violent, raging, roaring sound. As it issued from him he thought, this is the story of my love, this is the story of my hate, this is all there is left of me. And the sound echoed and re-echoed far up under the roof of the theater. 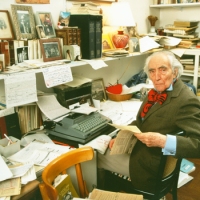