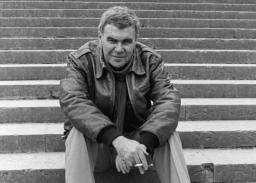 Nothing beautiful lasts forever. Especially when alcoholism is involved. You probably already knew that, but “Chef’s House” does a great job of exemplifying it in a short, direct punch to the gut disguised as a hug.

If someone is wondering what’s so great about Carver, this is the story I would send them. A great place then to start Raymond Carver Week on the SSMT site.

Everything in the story works together to drive home the theme yet nothing feels labored in the writing. Probably because the language isn’t working hard. It’s simple, straightforward writing. The lyricism is in the situation not the words. And that’s quite a trick on Carver’s part.

We drank coffee, pop, and all kinds of fruit juice that summer. The whole summer, that’s what we had to drink. I found myself wishing the summer wouldn’t end. I knew better, but about a month of being with Wes in Chef’s house, I put my wedding ring back on. I hadn’t worn the ring in two years. Not since the night Wes was drunk and threw his ring into a peach orchard.