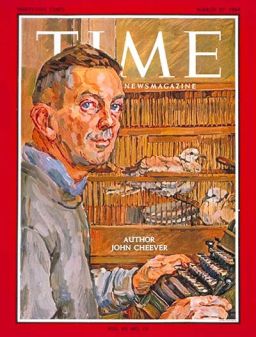 The Five-Forty-Eight by John Cheever, 1954

A couple of months back on SSMT we looked at Cheever’s story, “The Enormous Radio,” in which he combined a science-fiction element with his usual blend of middle-class realism. There is no science fiction in “The Five-Forty-Eight” and yet there is a similar blend at work. In this story, Cheever takes his middle-class realism and adds an even wilder card than sci-fi; he adds a mentally unstable woman.

Wronged by a terribly selfish man, she takes him (Blake) on a commute home from the office that he will never forget. At gunpoint, he is forced to reassess everything around him. The real trick is the way Cheever retains his typical gift for mundane detail.

During the train ride, he devotes a good portion of the story to noting Blake’s observations of the fellow passengers, including some backstories about his interactions with a couple of neighbors. In essence, the reader is getting a very standard scene here. Middle-aged man, works in Manhattan, bored with his wife, controlling as a father, rude to his neighbors, highly judgmental of all those around him. When the woman with the pistol shows up, she throws this standard scene into a new place.

Cheever manages to create a kind of heightened reality, where everything remains normal on the surface but the reader – and the character of Blake in the story too – is now looking at everything with a more investigative and interpretive eye.

I’m not sure I’m explaining this well, because I’m not quite sure I understand the effect myself. It reminds me a lot of Stuart Dybek – particularly “Hot Ice” – the way the story feels poetic and mystical within the story itself and not just in the detached world of reader analysis. The poetry seems to be affecting the characters as the story happens. Eudora Welty works within this world too. It’s a special, special place. And that’s quite a trick on Cheever’s part.

She touched Blake with the pistol. He felt the muzzle against his belly. The bullet, at that distance, would make a small hole where it entered, but it would rip out of his back a place as big as a soccer ball. He remembered the unburied dead he had seen in the war. The memory came in a rush: entrails, eyes, shattered bone, ordure, and other filth.

“All I’ve ever wanted in life is a little love,” she said. She lightened the pressure of the gun. Mr. Watkins still slept. Mrs. Compton was sitting calmly with her hands folded in her lap. The coach rocked gently, and the coats and mushroom-colored raincoats that hung between the windows swayed a little as the car moved. Blake’s elbow was on the window sill and his left shoe was on the guard above the steampipe. The car smelled like some dismal classroom. The passengers seemed asleep and apart, and Blake felt that he might never escape the smell of heat and wet clothing and the dimness of the light. He tried to summon the calculated self-deceptions with which he sometimes cheered himself, but he was left without any energy for hope or self-deception.