The Night The Bed Fell by James Thurber, 1933

Misleading the reader with the title and first sentence

This story reminds me of setting up a giant chain of dominoes. It takes some time to get them in place, but once you tip the first domino, the rest of the bunch tumble very quickly. It is a joyous experience – short-lived, perhaps, but always well worth the setup.

Thurber makes this story’s domino chain especially joyous with two little magic tricks. One, he makes the setup process (usually arduous) a delight by throwing in jokes and humorous asides along the way. And secondly, the real key: he fools the reader all along with the title and first sentence. The story opens with: “I suppose the high-water mark of my youth in Columbus, Ohio, was the night the bed fell on my father.” Clearly then we think we see how these dominoes are being set up. Watching them tumble about in the hilarious comedy of the denouement would have been wonderful enough, but it’s made even better when the plot takes a surprising detour and the chain of dominoes fall in an entirely different direction. The title itself is a joke at the reader’s expense.

I’ve read this story, probably, 20 times, and I still laugh out loud every time. And that’s quite a trick on Thurber’s part.

Father, farthest away and soundest sleeper of all, had by this time been awakened by the battering on the attic door. He decided that the house was on fire. “I’m coming, I’m coming!” he wailed in a slow, sleepy voice – it took him many minutes to regain full consciousness. My mother, still believing he was caught under the bed, detected in his “I’m coming!” the mournful, resigned note of one who is preparing to meet his Maker. “He’s dying!” she shouted.

One thought on “‘The Night The Bed Fell’ by James Thurber” 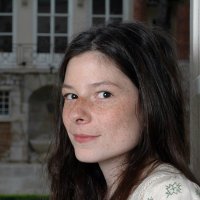